Quick Review Notes on the Spot 2 and Spot Connect 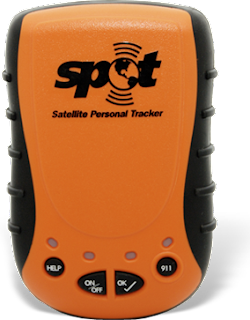 Summary: If you're pondering buying a Spot for tracking and emegencies I'd suggest NOT getting the Spot Connect. To do anything but send an SOS message doesn't work without a bluetooth phone, and the bluetooth pairing is sketchy even sitting at your desk at home. A spot 2 is better if you're actually outside of civilization, which is where I generally use a Spot. Bad product design. Spot needs a Spot Connect with Spot 2 physical buttons/menus.

Spot beacons are a great idea. They send short satellite messages from anywhere, and there's a button for "SOS" services so if things go totally sideways the Spot may save your life. But the more day-to-day useful functions include tracking, which shows where you are every 20 minutes or so on a Google Map accessible to anyone on the internet. Your friends, family, etc. can see where you are (some screen grabs here), and Spot tracking pages are increasingly common for adventure races, expeditions, guiding, wherever people are out of cell range. The Spot 1 and 2 also have a button for an "OK" message, which sends that message to a set of friends/family/whatever emails. So far so good.

I recently bought the Spot Connect, which theoretically does all the same stuff as the Spot 1 and 2, but also allows you to send 40-character text messages, which seemed cool. You compose these messages on a Bluetooth "smart" phone (Iphone, Droid, whatever) App, and then send them to the Spot over Bluetooth. If you're paired properly and if your phone has battery juice then this system works. But my phone did not pair well with the Spot; or rather, the phone paired well with the Spot, but the Spott App wouldn't recognize that connection, and wouldn't allow me to send messages at least half the time.

This is only annoying at first, but after 24 hours your Spot Connect basically becomes a brick only capable of sending SOS messages unless you can connect to it with Bluetooth (and the App will work, not guaranteed). Put another way, to turn Tracking on or off, or send an OK message you need to have a Bluetooth phone connection, which is flaky at best. With the Spot 1 and Spot 2 models the physical buttons turn tracking on and off and send OK messages, so as long as you had Spot power you were good to go. With the Spot Connect there are no buttons beyond the SOS and power buttons, and after 24 hours you can't use the Tracking or "I'm OK" features. Those features must be turned on through the phone after 24 hours or they shut off and can't be turned back on physically, only through the phone... Oh, and if you turn the Spot Connect off (to replace or conserve batteries for example) during that 24 hours then when you turn it back on it's in "brick/SOS-only" mode again, and you'll need to pair it with your dead cellphone's bluetooth connection that doesn't work so well anyhow.

I think this is really poor product design. A product designed to be used outside of cell range should not be reliant on a cell phone for most of its functions. All it would take is a couple of buttons on the Spot Connect so it would do the same stuff as the Spot 2 at least. I didn't believe the Spot Connect would have such bad design when I bought it; generally new products do more than the old ones.

If you're using your spot primarily in the backcountry, as I imagine most of you reading this are, I'd also suggest adding a line in your Spot emergency contact information that you will most likely need helicopter rescue. Some friends of mine had an accident, hit the SOS button, only to eventually have an ambulance pull up at the trailhead 10K away... Make it clear in your pre-defined message that you're likely to be in a wilderness setting without road access.

So I'm taking my Spot Connect back and getting a Spot 2 until Spot makes something more functional. The added function of the 40-character messages on the Spot Connect is a nice idea, but for most people the ability to use the Tracking and "I'm OK" features is more important.

I didn't find any good reviews on the Spot Connect on the web, so I thought this info might be helpful to those pondering a Spot purchase.

I went through this same decision-making process right when the Connect came out, and I ended up keeping my Spot 2. But I've been eager to check out the DeLorme InReach, which looks like it'll address all of the Spot 2 limitations--and add incoming texting as well. With your high-profile status, maybe you can get them to send you a test unit for review?
http://blog.delorme.com/2011/06/03/delorme-inreach-two-way-satellite-communication/

I have the Spot 2 and while the concept is really cool, the implementation has been a bit hit or miss. The tracking reports your position every 10 minutes which is awesome. My mother enjoyed watching our progress on our last backcountry trip. The tracking isn't covered in the basic service plan though. You have to pay a little extra to have it. My main gripe with the device is its reliablity. It often has a really tough time getting reception and frequently reports that an "OK" message was sent when none was actually sent. I'd be fine with not being able to send a message but it really bothers me when the light says the message was sent but it wasn't. It's not a huge deal if the "OK" message doesn't get out but if the same thing were to happen with an "SOS" the consequences would likely be more severe. All that said, it's still better than nothing when far out of cell range.

Will, have you compared the reliability of the Spot to the PLBs (Personal Locator Beacons)?

About a year ago I did some research on satellite based rescue devises and found that the reports were of much higher reliability with the PLBs over the Spot (as low as 80% tracking! ouch). I'm curious if that's changed. Also, the PLBs have no yearly $ fee associated.

Not much to add except that I completely agree. I've owned a Spot 1 and now a Spot 2 and am stoked on 'em. Great for remote helo retrievals where we used an expensive sat phone in the past. Sure, the outgoing custom texts of the Spot connect are cool. And smart phones should add a lot to future products as they are fairly powerful small computers. But it makes no sense to me to remove the spot 2 buttons from the spot connect. We get a sense that they thought about this a little by keeping the SOS button physical. I would much rather have a larger form factor with all the physical buttons than a brick/SOS when my phone dies.

I have a Spot Connect paired with the Delorme GPS. While I agree that having all the buttons on the Spot unit would be a good idea, and I have also had problems getting the Spot app on my Droid to work, I have found the bluetooth pairing to the Delorme GPS unit to be reliable. Only problem is that both units tend to burn through a lot of batteries.

Dead on. I bought a Connect last week and as a long time SPOT user, those missing 2 buttons make it useless. Who wants to have to pull a phone out of your pack just to turn on tracking?

It's very good to read your insights into this. I'm a SAR volunteer, and I've been writing about how smartphones are unreliable for backcountry navigation. Putting one in your critical communications path is not a good idea, they are fragile, eat batteries, and are not waterproof. Using the bluetooth in addition to the screen would exacerbate the battery drain.
http://blog.oplopanax.ca/2011/05/why-you-shouldnt-use-smart-phones-for.html

The SPOT and SPOT2 are much more rugged than a smartphone, and have a much longer battery life. It you're relying on it, make sure it's designed for the environment.

I also wrote an article about a recent rescue where the subjects set off a PLB:
http://blog.oplopanax.ca/2011/08/personal-locator-beacons-from-rescuers.html

They're not as accurate as you might think reading the manufacturer's web site. This probably depends on what model you get. I guess the problem with PLB units is that it's not possible to review them before you need them!

Anonymous said...
This comment has been removed by a blog administrator.
10:25 PM

The above comment was likely from Dan Howitt, who spends a lot of time trashing Chad Kellog. If Dan wants to post under his real name I may let it stand, but Kellog is an actual athlete I respect. Nobody is perfect.

Dan, real name only, and facts only, or I'll can every post.

@Unknown: I had the same problem with my Spot2 (the email light would go on but the Ok message would not be received). So I called up customer service. It took me 3 calls to get someone who knew what the problem was! VERY BAD CUSTERMER SERVICE! The problem is "user error." Buried in the manual is the instruction that the OK and custom message are on a 20 minute cycle. During that time Spot tries to send the message 3 times. I assume the idea is simple redundancy. But if you turn the unit off before the 20 minutes are complete the 1st or 2nd message may not have gone out. The email light STOPS blinking after the 20 minute cycle.

This limitation is not an issue with the SOS function, because that function stays on until the bateries run out or the message is canceled.

The problem with this is that it's not intuitive. It's bad design. It requires expert knowledge - that not even all customer service reps had. But ever since I understood this I've had no problem with my messages being received.

My problem with the Connect product is that it violates the KISS imperative. Smart phones are fragile objects with huge power requirements. They barely work in civilization.

I have the Spot 1 and have been thinking about upgrading to the Spot 2 but with everything I've heard about the Spot 2 the only advantage I'd have over switching to a Spot 2 would be the reduction in weight. The Spot 1 is absolutely amazing! I've accidentally left it on for a week and a half sitting in a puddle of water inside my kayak and it still works! (It smells a little funky now though...). I tried out the 'check-in' function when I was at McMurdo Station, Antarctica and the satellite picked it up way down there. I even used the SOS function in SW Utah for a injured hiker I found and saw the first SAR responder within 45 minutes. Maybe the issuse with the Spot 2 are individual unit issues but I'm definitely sticking by the Spot name and products. The only time I see myself using the Spot connect would be if I brought it along with my Spot 1...but unless I'm sponsored by someone (which I don't see ever happening) I see no reason to carry both and a smart phone...

THANK YOU. Great discussion. I have been wondering whether the Spot Connect was actually going BACKWARDS. Now you'd have 2 devices to worry about, just for the sake of...being able to post to Twitter? Or send a "custom message"? I'll stick with my original model, thanks. Still works just fine. Well, - except in Hawaii :-(