A danger you hadn't thought of...

I've done a fair amount of running, riding and messing about in New York City's central park. But I've been worried about getting mugged, run over by a sprinter, flattened by a drunk on a pedicab, but I have never once worried about the trees. Who knew?
Actually, trees have fallen and killed a fair number of people over the years in the Rockies. A couple of kids near Marble Canyon, someone on the Banff Springs golf course, and likely some other chaos I don't know about. I don't mean to make light of dangers of trees falling over (and I've been fully terrified in the lodge-pole forest around here during a windstorm), but I think falling trees is really not a major concern compared to driving, eating, drinking, or walking down the sidewalk. But stay heads up out there, the trees have a real bad attitude...
Posted by Will Gadd at 8:39 AM No comments:

Alaska, a challenge from Mr. Trotter. 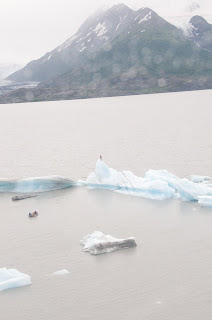 Alaska in the summer is fun--back home now, still thinking about the super long days, glaciers, icebergs, rivers and all the other stuff I saw. I was working for an Australian TV program (I'll reveal more on that later, not sure they want their cover blown) doing a story on glacial recession and climate change. Basically my job was to climb, kayak and otherwise mess about on the glacier with their host, and then talk about the changes I was seeing around the world as glaciers recede and the climate changes. I really enjoyed the experience, good people and a great place.
And when I came home I found a challenge up on a certain Mr. Trotter's website:
"Beat that Will Gadd, I double dog dare you fool. Just because you climbed Mount Robson (3,950 m) in 17 hours, doesn’t mean you can beat ME, I’m the best, or maybe you’re scared? Wink. Wink."
Right Mr. Trotter, let's get 'er ON!!!! (say that in a Mr. T voice). While it sounds like he had a fun day out in the mountains and may be sorta fit for a youth, he doesn't know fast from 5.14 in the real mountains around Canmore. Prepare to suffer fool! No winking, no nudging, I'm seriously pissed off and looking to open up a can of speedy whup-ass on the escaped chalk-eating rock monkey who has been poaching lines around here us locals would climb if we weren't so fit for slogging up choss heaps in the summer. I know choss hiking like Tigger Woody knows golf, no contest fool!
Posted by Will Gadd at 4:55 PM 3 comments: