Ice Season Cometh: Q and A 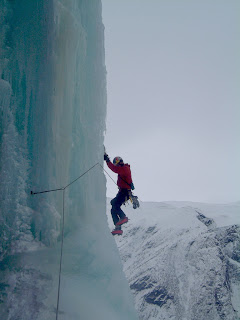 First off, sorry for the long delay in blogging. I've been stupid busy with everything from getting my first guiding exam done, family, writing, doing a couple of TV shows and of course climbing, mountain biking (broke some ribs, healing now), travel, and just life. Enough excuses, I'm back, thanks for the heckling/encouraging emails.
I'm going to do a new section of this blog where I answer questions from readers, starting with these:

1) There has be a lot of discussion on knots for tying ropes to rappel. While for that purpose only few people are still using the double fishermans (I use an EDK backed up with a second EDK), it seems to be the knot of choice for tying abalakow slings. Why? Couldn’t I use a doubled EDK here as well? That would seem much easier to tie with gloves on.

2) Now this might sound stupid: While I would never think this could work, I have read a few accounts of long, repeated abseils where it sounded as if the climbing rope itself had been fed directly through the V-thread, saving cord. Did I get that wrong? Can that work? I would assume under load the rope would freeze in place for sure. Maybe something was lost in translation…

-Greetings to the Rockies from Hamburg, Germany.

A #1: The EDK (simple overhand knot) is used for a couple of different reasons: It's relatively easy to untie, it's relatively low-profile on the pull so it's less likely to get hang up, and it's very simple. It does require relatively long tails in case it rolls; if a second EDK is used then that requires yet more rope. An EDK may not be the best choice for ropes of different diameters; I have never seen or heard of a problem with an EDK in the fieldand different diameter ropes, but there's likely a reason some people won't use the EDK with different diameter ropes. Even when weighted you can usually work an EDK out. Sounds like a pretty good knot for rappels with the same ropes.

A fisherman's in contrast, is hard to untie and takes relatively little additional cord for long tails. That sounds like a pretty good knot for a v-thread/Abalokov for me. A simple overhand/EDK might work OK for a V-thread, but would require more cord for tails, and more monitoring. There was fatality here a few years ago where the climbers came down, clipped into the thread, pulled their rope, and the thread "broke." What actually happened is that they had clipped into the long tails on the thread, which had re-frozen into the ice. Sad as hell. Always make sure you're clipped into the true thread and not the tails. Why use a knot that requires long tails for threads? I like to be able to rotate the thread to check the cord all the way around. And I always back threads up with a screw, or two if I don't know the solidity of the thread.

Here's where it starts to get rather pedantic, but there are more reasons I like the EDK (just one with relatively long tails for me in general, but two is a standard in some circles) for raps and a fisherman's for threads. A rappel is a relatively low-load scenario where only the climber's weight is on the rope really, and only half the climber's weight on any one strand (assuming the rope isn't a pullley through the v-thread, which would be bad as it would cut the material through the thread!). So a simple overhand is really, really unlikely to flip under the low load. But a V-thread may have a lot of weight on it due to two or more climbers clipping into it, and the likely scenario of a climber clipped a sling into the thread above it and then slamming down below the thread if they blow undoing their belay device or something... I'd want something really strong that wouldn't roll for my thread material, full stop. If I were using webbing I'd tie a water knot, cord I like a Fisherman's.

You could use a lot of different knots for a thread, and for a rappel pull, and you'd likely live, but I like a fishermans for V-thread cord, and a water knot for webbing, and an EDK for rappels. Do use at least 7mm cord for threads.

#2: Yes, and I've done it lots. BUT, if the rope re-freezes even a tiny bit in the hole, or there's a lot of rope drag from, say, twists, you can rapidly have a bad experience with a stuck rope. If you want to rap using a rope fed through the thread you'll be feeding the "fat" rope through the hole; if you climb on two 8mm ropes or a single 9.1 then no problem, but if you're rapping off with ropes of different diameters then you need, as normal, to pull "skinny," which means the fat rope goes through the hole. If the rope is a hairy beast of rope or frozen up at all then the sharp bend in the back of the thread, or if you didn't get the thread perfect (and I normally am off by 20 percent or so) then there's a natural "pinch point" in the back of the thread. I actually leave 7mm cord or one-inch webbing with old 'biners or quicklinks on the cord if getting the rope stuck would be any problem at all, and definitely don't feed it through. It's one of those ideas that works really well occasionally, but in general opens up a mess of problems.

So there is a really long answer to two short questions! And there are levels to all of this; for me recreationally I'm totally fine with one loop of good-quality 7mm cord for the thread, but that' far from "full strength."

Few solutions or concepts in climbing are absolute. I've been playing this game for more than 30 years, and each year I revise, tune, toss out and otherwise change my systems in light of new ideas or data. This summer I took the first guiding course and exam here in Canada; I learned a lot, but the most important thing I learned was a different way of looking at climbing.The big thing is to have an understanding of what you're dealing with, or reduce the situation to parts that do make sense and will do the job at hand.

Finally, Mark Beverly has done a lot of good research, here is some he did on horizontal vs. vertical V-threads, as well as the differences materials make in the strength of threads. Fatter material is better. I'm not yet sold on the benefits of vertical vs. horizontal V-thread placements, but will play more with them this winter.

And there is ice in the Canadian Rockies, saw it today. Go get it!