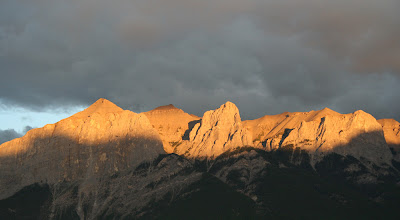 I'm up early this morning to do some work on Europe time and finish some other things that need doing before the day really starts. I'm not a morning person in general, I've spent far more nights that ended at 4:00 in the morning than I have getting up then, that's just the way it is. I crawled out of bed all bleary-eyed in the darkness before dawn and went to work at the kitchen table while swilling black death coffee. My surprise reward was watching the sun rise on the peaks around Canmore. At first it was just a thin sliver of delicate light creeping along the tops of the peaks, then as the minutes passed the light show grew into a mad symphony of light and cloud swirling through the peaks. Beams would lance down through the clouds and light a rock pillar so perfectly, then fade out into the grey of limestone as another beam blasted somewhere else on the range. It was almost like watching a really good fireworks display, where each eruption of light was better than the last, and made somehow sweeter because you knew it had to end. The show made the work seem pretty irrelevant but getting up early so very worthwhile. I always love the feeling of being up early hiking into a climb or even just driving as the sun comes up on new terrain, so why don't I get up early more often? Who knows, but it sure was a fine morning. Mornings like this remind me exactly how cool the Rockies are; I get to travel a lot, but my home mountains still always leave me in awe.

Mountain light has got to be one of the greatest things going, it's a treat each and every time I get to watch it.

Here's a photo of it all, better in person but had to share this.
Posted by Will Gadd at 6:37 AM 2 comments: