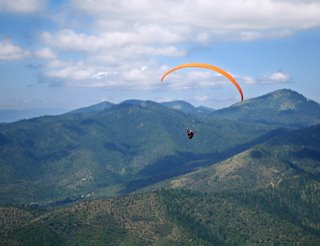 On Sunday I'm off the annual Rat Race, a high-level paragliding competition in southern Oregon. I did it last year and had a good time flying with friends, looking forward to it this year. The photo is from Bo Criss from last year. Paragliding competitions bring out the best and worst in flying; the best when the flying is good, and the worst when we end up sitting on the hill all day waiting for good conditions... I'm fired up to fly, but if the flying is no good I'll be able to climb at the Rogue Rock Gym in Medford, which wasn't open last year. I'm actually maintaining a pretty good climbing fitness so far this year, I do not want to go through last year's hell of getting strong again after sitting in my paragliding LaZboy chair all summer...

Made the news yet again as a double amputee and about 40 other people choose to summit rather than try to help a dying climber down the mountain. Who knows what actually happened, but it's clear that Everest is a circus that continue to amuse the public, and justifiably so. The summit is now more highly coveted by the public than by climbers, it would be a funny situation if it weren't so deadly. Climbers get incensed when every accountant or car dealer who summits (or doesn't?) makes the local newspapers, while far more "epic" ascents on other mountains receive no mention. I have to laugh at this a bit as what climbers are really saying is, "Hey, pay attention to MY climbs!" I also have to agree that climbing Everest by a standard route with good Sherpa support isn't all that much of an accomplishment, perhaps more of a financial accomplishment in gathering the money than a sporting event. Sharon Wood and the other Canadians who climbed a difficult new route on the way to the summit of Everest 20 years ago deserve their press and respect for sure, but reporting every summit climb is starting to get ridiculous, like reporting who won the local golf tournament as front-page news. Today in the Calgary Herald there's a story about a local woman who is attempting to climb what she defines as all seven summits. This is not news, it's not a sporting accomplishment, but there it is, front page. In one sense I'm happy to see climbing get any press at all, but surely the new route Raphael and Scott climbed last week on Andromeda is more worthy of front-page news? Maybe if Raph or Scott was brain-dead and blind then it would have been more newsworthy? As someone who plays the media game and has also worked at various magazines I feel I'm qualified to say that the media, even the climbing media, doesn't really understand climbing, climbers don't understand the media or the public, and the public will never understand climbing as its portrayed in the media (I sure don't). No wonder everyone is confused, and the resulting mix is so very strange, as it is today in my Calgary Herald.

It's an odd time of year, where I'm trying to climb and also trying to fly and do all the business stuff I ignore in the winter months while climbing. I've been slipping in high-quality if short workouts at the end of the day. A couple of days ago David and I had a great workout after I ran some errands in Calgary, we went to the University of Calgary and spent a couple of hours bouldering on the outside wall of the PE building. Back in the early nineties I spent days on this long wall of flagstone bricks, it was a serious physical flashback. We finished the workout by going into the dungeon at the U of C and climbing on Murray's old inset brick wall, and on the even earlier plywood and two by four wall. I spent literally hundreds of hours in that basement hallway years ago, it was actually super fun to try some of the old problems. I even got low blood sugar just like the old days when my diet resembled that of a rabbit (we used to think any bodyfat over about three percent was a serious hindrance, how times change...). Anyhow, a great "Nostalgia" workout as dD called it.

I've been mountain biking some this spring, including a great ride with "buzzsaw" Joe in K-Country. We rode around Barrier mountain, an epic ride, it really fired me up to do more riding in K-Country. Yesterday I rode with Mark for about an hour, then went for a short run with Chili dog, followed by a good yoga session. I'm slowly gaining more flexibility, although public reaction to my attempts at Yoga generally involves laughter. So what, I figure I'm not getting any stiffer at least, plus Yoga is good for the head.
Posted by Will Gadd at 10:24 AM 2 comments: