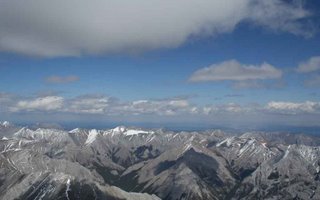 After ten days of trying we actually got a good flight in off of Lady Mac above Canmore. Josh, Kim, Jerome and I hiked up, moving slow due to Josh having a blown knee. Cruised along, ended up launching at about 1:00, I got yanked into the sky. It was interesting flying, fairly windy at base (about 3,800M), but with big thermals to block the wind. It's always fantastic to get to fly in the Canmore area, big peaks with snow, love that action! The photo is looking east toward Calgary, Cougar Creek is the main drainage. It's officially really flying season again, finally!
Posted by Will Gadd at 6:04 PM No comments: 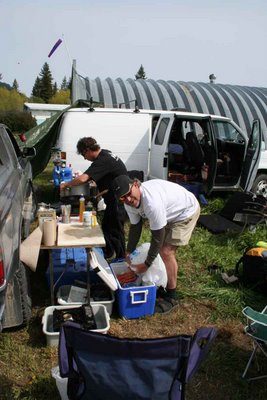 Back home. It's been the spring of road trips, partly due to shite weather here in Canmore and partly just to listen to the tires on the road. I'm trying to shoot with photographer Jerome for the Gin catalog, but we've really flown only one day in the past eight, too windy the rest of the time. We did get a short flight in at Hedley, but it ended quickly when Jerome flew out into the valley and went backwards for a bit. He wisely choose to side-hill land in the lee to escape the valley wind. I watched all this while thermalling above him, then did the same. The air was not friendly. Later I learned that Keremeos, the name of the next town up the valley, means "really windy place" in the local native language (seriously). The Hedley valley is a relatively V-shaped valley surrounded by high plateaus; you couldn't design a better place for valley winds. It will have exceptional flying some days, but in general it's not a place I'd recommend for inexperienced pilots unfamiliar with valley winds and how to escape them. That said, our three days in Hedley were great; fun locals, lots of climbing, kayaking, hiking, gold mine tours, it's just a great town and one I look forward to visiting more in the future. The options are endless.

A lot of what I love about road-tripping comes from the people I get to travel with. In Hedley we met up with the full "Muppet Show" from the west coast. I think the name started with my bud Jim O, as we are indeed muppets on strings when flying paragliders. Anyhow, the Muppet Show varies in size and composition but includes an incredible chef, AKA the Dingo. The Dingo cooks at the best restaurant in Whistler, and travels with coolers of top-notch food and the ability to put together the best food I've ever eaten. But the real highlight is watching the Dingo cook, it's a Cirque de Soleil style festival of speed, alcohol and general culinary madness that only reaches fruition when the food hits your mouth. Thanks to the Dingo!! The rest of the Muppet show knows how to erect a nylon refugee camp in ten minutes flat using vehicles, kayak paddles and whatever else is handy. There's an art to nomadic living, and the Muppets have it down to a joyous science. Many of my best hours have been spent camping in apparent squalor but with a standard of life far higher than I find while occasionally staying at the fanciest hotels in the world. It might seem a bit trite to say, but I always return from trips with the Muppet show reminded that real life is best found outside with friends.

On Wednesday Jerome and I stopped off at Skaha while driving to Lumby and shredded ourselves running from route to route. Skaha is a hobbit land of fun climbs; we stoppeed climbing only when our skin was bleeding and the sun faded into a blue evening. I was so worked I couldn't even climb a relatively easy route, I love that!

Thursday was spent in the company of Randy at the Lumby Air Park, always a pleasure, and we even flew twice betweeen rain storms. Lumby offers the most reliable soaring in Canada I think. It's not the best place for competitions due to the variable weather, but those variations almost always produce at least a couple of hours of soaring conditions, it's amazing. I've spent months there over the last four years, it's starting to feel a bit like home thanks to Randy and the good scene there. We had to seperate from the Muppet show and head up home at night, now Jerome and I are back in Canmore and watching the wind howl yet again. I really hope we get to fly the next couple of days!

Hedley is located in the middle of nowhere, also known as southern BC. It might be worth taking the time to look it up on a map--Hedley is one amazing place. In the last two days we've done some excellent granite bouldering, crack climbing (10-foot roof with a wild crack) plus some kayaking and nice mountain running. The town is full of characters and loose nuts shaken here by various storms, a nice change from increasingly homogenous Canmore. We've been treated very well by the people here, I know I'll spend more time here in the future on the basis of the people I've met.

No flapping for the last two days but, but lots to do so no stress. Today doesn't look too special, but you never know!