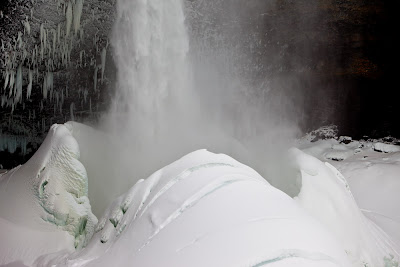 The last two weeks have been higher speed than usual. Travel, prep, closed roads, full chaos, but Tim Emmett and I have now been at the Helmcken Falls Lodge for five days, and climbing every day. So far the climbing has consisted of super technical radically overhanging ice action to just get a line of gear out the cave. Yeah, CAVE!
We're bolting ground-up 'cause it's too steep to rap, and there would just be no way to find the line from above. It's just nuts, insert expletives here. And we haven't even climbed anything new, just worked and worked. Each time one of us comes down after a bolting session we're just done mentally and physically, battered and bruised and stomped upon by falling icicles
The icicles in Christian Pondella's photo above are anywhere from ten to 50 feet in length. The snow cone is at least 100 feet high. We had to rope up to cross the crevasses, that's how big it all is in there, the scale is just mind-bending. If it gets too warm we're done without climbing anything, but the temperatures are holding, we found last year's bolts under the ice, and it's all ON! We start really climbing tomorrow, but realistically have another two days of prep to get to the top of the ice. Yesterday we sent down tons and tons of icicles, and yet you can't even see where we've climbed unless you're looking at just the right angle.
Seldom have I ever been involved with a route that feels so far out there. Icicles, rock, angles, crevasses? But one thing is for sure: We're exactly where we want to be, have received far more than we dreamed of, and are totally stoked to be doing our best. You don't get too many times like that in life really, yeah! Upward.
Posted by Will Gadd at 2:51 PM 8 comments: