How not to suck

First, sorry for the delay in posting. I've been on a speaking tour, an 80-hour first aid course and some other busy sports actopm. But all good!
I answer a fair number of questions about ice, rock and paragliding gear and tactics. I try to always reply to these emails, but it recently hit me that readers of this blog might enjoy the answers as well. I'll try to post some of them up here for grins, using sorta made-up names. Got a question? Send it in, I'll get on it, thanks.
Tied Off Ice Screws:
Hi Will,
I was wondering if you had information about the shear potential of an ice screw that's been tied off? Geoff seems to remember seeing a test that shows a fall, then subsequent sheering of the head of the screw. But I can't locate it.
Thanks for your great analysis of the ice climbing video!
Hi JX,
Tied-off screws are pretty close to worthless from all the data I've seen. For starters, the screw has to be placed with the "hanger high," so that the tie-off doesn't slip to the head of the screw immediately. That's not a very strong angle for a screw, the load levers the screw out of the ice very fast even with a full-depth screw. In practice the tie-off is loaded, screw starts to break out of the ice and the tie-off slides to the head of the screw, where either the screw totally breaks out of the ice due to the unsupported "lever action" on it, the screw bends (actually better), and the tie-off is cut by the hanger or stretches enough to slip over it. Not good.
It's far, far better to use a stubby than a tied-off screw in any situation I can think of. Plus a tied-off screw almost always hits the rock under the ice, which ruins the teeth... I carry mostly 13cm screws with one 19 for threads, maybe a few 16s for grins, and a some stubbies.
Hope that helps!
Best,
WG
Additional Notes: Screws used to only come in long lengths, which meant that even in six-inch thick ice we had to tie 'em off. Now screws come in all kinds of useful lengths, and I haven't tied a screw off in years as a result. I would far rather have a "too short" screw than a "too long" screw. In good ice you can make even a very short screw very strong.
Posted by Will Gadd at 7:39 AM No comments:

Ice Climbing is NOT rock climbing. 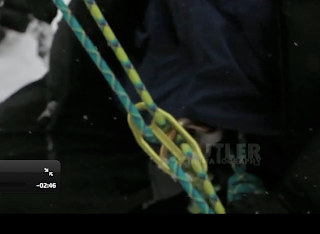 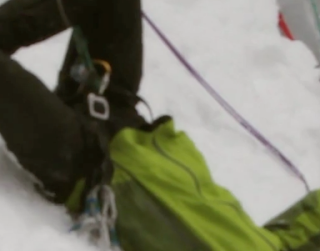 Will Gadd note after the below was posted: Please keep the comments somewhat civil and constructive. There is a lot of good information (harness, gi gi) getting added, let's focus--as most people are--on what can be done differently rather than attacking either the climbers or the video effort. Just for reference, I've personally made a lot of the errors in the video, we all have, the idea is to learn and do better, thanks.
And the two screen capture pictures are of the BD Bod harness that's not doubled back (you can tell because you can see the two silver pieces, shouldn't be able to see 'em both!) and the Kong Gi Gi, which is getting used totally inappropriately. That the harness and the belay both held is pretty amazing to me, I would not have put money on either system holding even a short fall. Thanks to the comments section for noticing both, I didn't until it was pointed out, which kinda scares me...

Fall. from Jeffrey Butler on Vimeo.

Fall. from Jeffrey Butler on Vimeo.