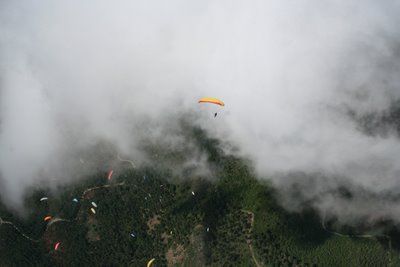 This morning looked grim--foggy, windy and building high clouds. Somehow it all cleaned up by about 12:00, and a short (42.5K) task was called. Waiting for the start in the air was interesting--it was very windy above about 7,000 feet (I use feet in US meets to keep it simpler), we kept drifting downwind at high rates of speed up high. But the cloud flying was amazing--I think there was some sort of wave action, we were able to surf the front of clouds at least 1500 feet above base, a rare treat in paragliding.

The task was a couple of laps around the local Wood Rat valley, then off into the small hills of the Rogue valley. I had a solid start and hammered around the first two laps in the lead with Eric Reed, the conditions were really nice with smooth glides and fast climbs. Eric and I were able to glide the first two laps with only one thermal, but had to use a lot of bar on the into the wind legs. Most of the field wasn't far behind us, which lent motivation to pushing on the speed bar. We then headed out into the Rogue valley and got slowed down--Bruce Goldsmith, Bill Belcourt and a couple of others caught us, and we all climbed together in a weak thermal. I was sure that there had to be something better and left to go find it. I thought the hills were going to work better than the flats, but got flushed out of them and very low, about 200 feet above the ground, but I could just tell it was going to work and sure enough I was able to slowly grovel back into the sky. Unfortunately Bill and the others had gone on glide to goal by then, with Bill into goal first. I'm pretty sure he won the meet as he also did well on the first task. I played it conservative into goal, once I've lost the lead I'd rather be solid in getting to goal than land early as many pilots did. In the end there were probably 20+ pilots into goal, amazing given how the day looked. I don't know where I placed but had a great flight. It's always better to end a meet with a good day of flying!

Last night I hit the Rogue Rock gym again, and started out by learning how to slack line instead of climbing for about 45 minutes, super fun. I've only tried slacklining a few times, I'm going to have set one up in my yard for the future. Got a good session of bouldering on the crew there, we ended up in keeping the gym open to beat ourselves up on a cool hard route into the night, a great workout. I really like visiting different gyms as I travel, I always meet good people and have a good time. The Rogue Gym is a good gym if you're ever in the Medford area, well worth a visit.
Posted by Will Gadd at 6:00 PM No comments:

The last three days have been rained out. It happens.


Workouts: A fair amount of drinking, running, climbing in the Rogue Rock gym, Yoga and drinking has gone on and been fun.
Posted by Will Gadd at 9:28 AM No comments:

A good task, a good day! Len won, something like 45 people in goal, fantastic! Good to see so many friends again, it's a gathering of the winged tribe for sure.

I had a very mixed day--somehow mis-timed the start and was a bit low when it happened, but high enough. The strange thing was my GPS didn't flip at the first turn point, and I didn't check it until I was about 3K past the point--I knew I'd flown right over it from the comp last year, but the GPS didn't switch, so... I flew back, got it for sure, then continued on the course but 15 minutes behind the leaders. Comp experiences like that are mind-taxing, it's easy to let the negativity of making a stupid mistake ruin the day. I was pretty much last on the course after my additional turnpoint, but managed to rally enough to make it into goal about 20 minutes behind the leaders. The whole time I figured I was in dead last, so I just relaxed and enjoyed the good flying, and it was worlds better to at least fly the course rather than blown up mentally. As happens so often, I ended up doing OK but forgetting the comp attitude and just flapping. I think it's important to compete a lot to be in practice, I haven't competed in a year and my systems were not tight. We loaded up my flight last night and I did indeed fly directly through the first turnpoint, but for some reason my GPS didn't flip. I should have been paying more attention.

Keith, Rob and Grahame all made goal, Nicole missed it by being a bit late and geting shaded out. Still a very good showing for team Canada.

OK, we're heading up the hill right now although the sky looks like grey.
Posted by Will Gadd at 9:54 AM No comments:

It's been a fast-paced few days. On Friday Kim and I drove up to Jasper to wish my Mom a happy 60th birthday (happy birthday again), followed by a drive back to canmore, mad packing, then to the Dom semi-invitational suffer fest in his home gym that night. It's always a wicked event, thanks to the Dom family and all the other people who poured sweat, chalk and blood on the holds all evening, I always crawl out of Dom's garage. Then the party games started, which I suck at but lots of good energy from all the folks. Knut put me up at his house in Calgary that night, then up early to fly to Medford, Oregon, for the Rat Race paraglding competition. I got a great Yoga session on in the Portland airport, I always expect to get hassled as a potential Jihadist or something for doing yoga in US airports, but all cool, and it helped work out the kinks from Dom's desperate comp. Finally made it to Medford, amazing how much can happen in such a short period of time.

Today was one of the best flying days I've had in a long time--the area around Medford is just made for paragliding, awesome flight out to Grant's Pass and back--I didn't have to turn for around 30K straight, just blasting along at and above cloud base, amazing. Flights like that are why I fly. There are over 100 pilots down here, it should be a very competitive comp and conditions look stunningly good...

After flying all afternoon and doing a tandem in the morning Keith and I hit the Rogue Rock gym in Medford, it's a good gym, still worked from the comp but had a good time pulling on plastic. The comp starts tomorrow and it's late now, time to wrack and get fired up in the morning, yeah!