Something old is new again... 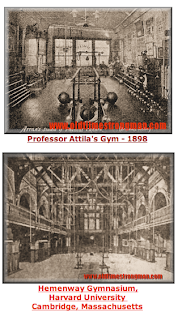 Somebody else has likely pointed this out already on the web somewhere, but a modern Crossfit "Box" looks a lot more like a gym from 100 years ago than a "modern" gym stuffed full of machines. A classic Crossfit line comes from the Terminator flicks, "Machines are the enemy." I was pondering that this afternoon as I banged my head repeatedly off the floor (also called handstand pushups) in my local gym (Athletic Evolution in Canmore, good gym). The amount of open floor space in there is a lot higher than in most gyms I've worked out at over the years; many of the "gyms" were really machine rooms with no space to move. I remember seeing photos of old-time gyms; rings, barbells, kettle bells, open space, simple stuff to develop functional movements. So, as usual, I got to surfing on the web tonight and found all this great stuff about training in centuries past. I screen-grabbed the picture from this site, worth checking out. Cool, everything old is new again. They even had rowing machines on the Titantic, which is somewhere between inspirational and ironic. For some reason I find this all "old time" stuff very cool.
I even ordered some books to see how these guys were training. I'm going to laugh myself silly if there's a workout in there that reads like, "Do AMRAP in 20 minutes of of five pull-ups, ten pushups and 15 squats" or something, ha ha!
Happy weekend.
Posted by Will Gadd at 8:19 PM No comments:

It took two months longer than I thought it would, but I'm finally done with the course syllabus for "Mountain Movement." The idea behind this course is to help people move more securely, enjoyable, quickly and with more overall comfort in non-technical mountain environments. The more time I spend in the mountains the more I realize the crux of many days is not the climbing or technical rope skills but the talus on the way to the climb, moving quickly down the steep slippery trail, or staying ahead of the nutrition curve while moving for hours at a time. I'm so fired up on all of this that I'm writing another book on the subject, and I want to continue the field drills I've been doing with some "guinea pigs...." The dates are July 15 through 18th, drop me an email if you're interested, should be fun!
Posted by Will Gadd at 4:19 PM No comments:

Crossfit Level One Certification--quick notes on it and CF

A few more "tricks" for moving fast on ice