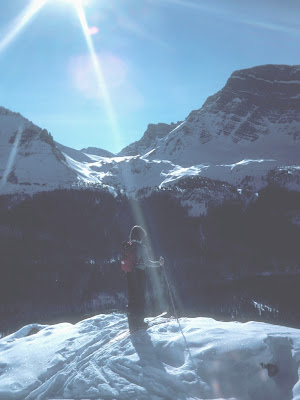 This photo is from a ski tour I did with my dad in about 1977 in the Canadian Rockies (maybe Dolomite Pass?). I'm ten years old. The gear I'm on is far less supportive than modern BC NNN gear, the skis have minimal sidecut, and yet the fun level is for sure at least as high as it ever has been, was, or will be. Yesterday I was out with my daughter; I was on high-end XC classic gear, she was on plastic waxless rigs. We both had fun. Skiing rocks, it's not fundamentally about the gear but getting outside and skiing. I want to be clear on that, it seems some people are missing the point that gear is a means to an end, not an end.
That said, function and style are related. Personally, I like using functional gear, meaning gear that fits the use, no matter what the sport. If my goal is to do tricks in a kayak I'll paddle my play boat. Creeks, you want a fat creek boat. Paddling a play run in a creek boat is relatively boring. Skiing flats on AT gear with skins on sucks compared to the same terrain on well-waxed race XC gear. I can not find one place where telemark gear is, for me, more fun, more functional or better fits the "spirit" of what I want to do, at least today. That could change; I did a lot of tele skiing in resorts for a while because it was more fun than alpine skiing there for me and a real challenge, but I burned out on that eventually. That was still a good period in my ski life, no regrets, but not where I'm at now. Function and style are not all exterior, a lot of what forms the definition of "fun and functional" is in the skier's head. Some people want to run sick creeks in low-volume play boats. Cool, I'll watch. I'll skate up skis resorts in the early morning and fly on the velvet on the way down, that's fun too...
Just to clear up where I'm coming from, if I could only have one set of skis/boots I'd run a set of NNN backcountry gear with metal edges. I can ski just about any resort run in North America on that setup (not rip it, but get down OK), ski set tracks, ski the back country, do just about anything. That's the most versatile gear for a solid all-around skier who wants to ski anywhere. Not the best for skiing into ice climbs obviously (have to change boots), but it would work. The learning curve for this gear is brutal compared to AT gear, the best prep is XC race skiing. A lot of people are more into the yo-yo style skiing, or hucking their meat, great! I've got skis for that too, let's play!
Some of the comments on the Teletalk site (ten pages and going strong) seem really defensive to me, like how the insecure and religious act when their God is questioned. Those secure in their faith are fun to talk with; those who scream, "Blasphemy" get old fast. Telemark skiing doesn't need "defending" if it's working for you and you're secure in your belief that dropping a knee gets you closer to god. I just think telemark skiing has gone off in a weird direction, and so far it's not coming back.
I did some telemark racing back in the day, but gave it up when an alpine-racing friend of mine (Jim Grossman, surely one of the more talented skiers I've ever seen) tried on some tele skis and proceeded to shred the course on his first run. He did a "pretend" tele turn, but really just rode the outside ski hard and relied on his years of alpine racing experience. His comment was, "Why not just parallel?" If you have to pose to compete then it's getting closer to figure skating, and that's weak sauce. On hard, consistent snow with big gear tele turns make little sense other than to pose. Trim yer goatee.
But the telemark turn is just as functional, useful and all-around fun to do as ever even if the gear named after it now has little real relation to the turn itself. I use the tele turn more on my lightweight "nordic" gear than I ever did in the last years of my "tele" career; on heavy tele gear I generally just do some version of the parallel turn . The telemark turn is great for dealing with softer conditions on lighter gear. In consistent conditions the parallel turn rules no matter what gear you're on. Telemark skiing to me now means doing tele turns on light BC NNN gear during a big tour; works great.
I was cleaning out my garage yesterday evening (I've got a serious Cultfitter infestation going on, had to make some more room!) and found an old pair of Voile Mountain Surf skis, with cable bindings on 'em. They are my wife's, and she won't get rid of them because, "Old skis are like horses, you can't just shoot 'em!" My old "tele" skis are gone, but I can see her point, even as the dust gathers on the old boards.
And, never forget, I'm a damned ice climber, not a skier, ha ha! The super-steep plice is destroying us!
Posted by Will Gadd at 8:18 AM 8 comments:

The Evolution of Skiing: Tele is a zombie.