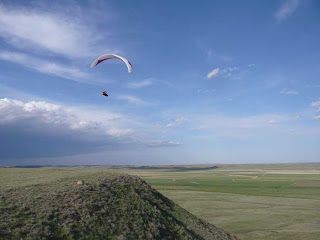 It's been a while since I wrote anything on here, but I've been crazy busy with travel and a video edit, so I've been playing when I have the time to do something non-work related. In the last few weeks I've been in the water and air a lot more (surfing in LA, thanks to Sheldon for that), paddling on the Kananaskis after work, flying in Saskatchewan (really good despite it's flat reputation, thanks to Jim Bahr for the hookup!) etc. My elbow is coming back strong, but every time I go rock climbing (bouldering in Squamish a few weeks ago, crazy fun!) it tweaks out, so I've decided on an active recovery program based on any sport but climbing, which is going great, definitely much stronger and happier, climbing will come.

I've been thinking a lot about the differences between what I call "flow" and "static" sports of late. Flow sports include kayaking, surfing, mountain biking, skiing, paragliding and any sport where the motion doesn't easily stop mid-action. "Static" sports include climbing, hiking, tennis, landscaping (been doing a lot of that, it's a sport for sure, anything you can get really sore at is a sport of some kind) etc. Now, static sports can have an element of flow and even brief moments of truly dynamic movement, but in general you can just stop doing them at almost any time and not much happens. In flow sports you can't stop without at least something interesting happening relatively quickly. In kayaking you're in the flow from the top of the rapid to the bottom, same with flying. In skiing you can also stop, but there's a much stronger sense of linked movement and reaction to the every-variable snow than in climbing, so it's a flow sport also.

I think we as mountain sports athletes often think the sports we do in the mountains are all related, but I don't think they're related beyond being in the same geographic area. Flying is far more like kayking than climbing, and surfing is far more like skiing than climbing. What's interesting to me are the mental links between these sports; someone who enjoys climbing may not enjoy or be mentally cut out for flying, it's a completely different form of stimulus and response. A pilot may not enjoy climbing, or be any good at it. The best pilots and best climbers are usually very good athletes and can cross over relatively easily, but I'm starting to think that the sports are best grouped not by their geography or physical movements but by the mental patterns a participant experiences..

When I first start flying and paddling every spring I can literally feel my brain working completely differently; it's not a physical response, but a mental re-wiring that needs to happen. When I'm paddling and flying a lot my reflexes are noticeably faster; I'll catch a dropped pen before it hits the ground, or respond on a "hard wired" level to stimulus that wouldn't effect me at all when I was climbing a lot. Driving feels very, very slow when I'm doing a lot of flow sports--I truly see traffic in a totally different way. When I go climbing after paddling a lot I'm too "twitched," and my motor skills are definitely messed up--it feels like I'm waiting for something to happen. I'd bet that I would respond much faster to a falling rock after a spring spent paddling than a spring spent sport climbing. Bouldering crosses a little more into the flow side of sports, but it's still relatively short, and often about grunting a well-visualized movement out smoothly than responding to new stimulus. The rock doesn't change a lot, and it's easy to step back and analyze things carefully. When I'm climbing well I see patterns and sequences better; I'll automatically sequence getting in and out of my car, or think about how I'm going to open a can of tuna--I can't help it, that's just how my brain works when doing a lot of climbing. I'll bet a CAT (Edit--MRI or PET is the correct technology) scan would reveal real differences in brain function; someone more educated than me can probably come up with what parts would be lighting up while paddling a big drop vs. climbing a sketchy 5.11 high above gear. Climbing is much more thought and visualization-intensive, paddling is much more reaction-intensive.

There are experiences that are common across flow and static sports, such as standing on top of a peak enjoying the sun or floating between rapids deep in a canyon. There's the same sense of appreciation for the power of the natural environment, at least for me, but the tools to access that state are totally different. I love the experience of blasting through deep powder just as much as giving blood and skin to a hard crack in Indian Creek and the physical "cook" can be similar, but they are totally different on a mental level.

No real point to this obviously, just interested in how my mind responds to sports. Flow, static, it's all good but so different. I look forward to thoughts others may have...