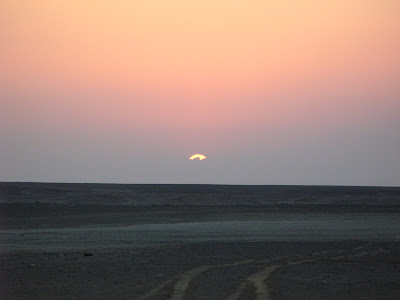 The last ten days have passed in a blur of travel, filming, climbing, flying and the places and people of Morocco. I'm working on a new series for Discovery, crazed but good. Highlights of the trip included climbing a new route on absolutely the worst rock I've ever climbed, flying over the sand dunes of the Sahara and some other stuff that will have to remain secret until the series starts airing late this year.

I last traveled in Morocco about 20 years ago, this trip was a lot more fun. First off, we were working a with Moroccan crew, and I always enjoy working with people in their own culture instead of just being a tourist. Last time I was in Morocco I was dead broke and pretty much at the mercy of everyone, which I honestly did not enjoy all that much at times. Every developing country comes with a certain amount of "You're a white tourist with a $ sign over your head" and I don't blame the locals at all for that, but it's been taken to a much more aggressive level in Morocco than in some other countries I've visited. On this trip we were usually in remote locations, and the people were a lot more chill than they are in the cities.

Morocco is a relatively tolerant Islamic country (you can buy and drink beer), but it's still a total trip to see women in eyes-only clothing, had some good talks with our Moroccan crew about all of that--there are some perspectives that are just hard for anyone not brought up in that culture to understand, but good to talk about in a 4wd blasting across the desert. I'm feeling pretty lucky to live as I do. One thing that always strikes me while traveling all over the world is that the level of comfort, medical care and general ease of life that defines North America and Europe just isn't the way in most of the world. Our opulent lifestyle is just that, it's not the rest of the world that is poor but us that are very rich in comparison--financial poverty is the norm globally. I always come back wondering why I was born into such relative luxury, the world is not a fair place.

We shot way out in the desert near the Algerian border for most of the trip, fantastic place to be, a lot like the Mojave desert between Vegas and LA but stripped down and even drier in general, stunning. I mangled the French language aggressively as per usual, (Morocco was a French colony like much of northwest Africa at one point, French still the common language) and had a great time in what was for me insane heat--temps over 45 (110+ American).

Writing this up on the flight back home, the first time in a week I've had more than about ten minutes of "free" time, feels good to just sit back and not worry about drinking liters of water every hour. One thing I discovered on this trip is that plain water doesn't cut it after a certain point in extremely hot weather, mixing with electrolyte powder is WAY better. I suspect I've had some go-arounds with hypernatremia in hot weather in the past, electrolyte mixes are the way forward.

I'll post some more details about the air dates on this series when I'm done with it, off to Alaska next week then two more shoots and it's a wrap. I'm the "presenter," which is a new role for me, definitely a huge challenge to do well. Good presenters make it look easy, but it isn't...

Thanks to Josh, Tom, David, Tim, James, Claudia, Jimmy, Aziz, Omer, Salim and the rest of the crew for making it a great trip despite the insane schedule and temperatures. I'd like to visit Morocco again with more time...

Photo courtesy Josh Briggs, thanks.
Posted by Will Gadd at 4:03 AM 3 comments: