It's come to this: The "Plice" 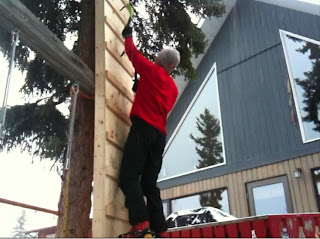 Normally there's a lot of ice in the Canadian Rockies by this time of year. And, in general, there is enough now for most people. But I need dead-vertical big chunks of it, and there's not much of that around yet. The normal pillars haven't formed, and most of the bigger routes aren't that steep or are under some horrendous avi hazard. But I'm on this 24-hour ice climbing kick at the moment, and I need to climb a lot of vertical ice... Bitch bitch, solve the problem: my own ice training wall in the backyard!!
Now I could have hung hoses and messed about, which might have been neater looking and cooler, but I wanted to train later that day and it was nine in the morning. The solution was to bust out some power tools, duct tape and go-juice. My dad helped, and I was training on this thing by noon. Ten laps, swing at one round of wood, repeat.
If I get my butt on the ground (literally) and climb a little into the tree at the top so my hips get over the top of the wall I'm doing 16 feet up and 16 feet down, or 32 feet a lap. Thirty two laps is pretty close to 1,000 feet... I'm up to about 60 laps a session at the moment. It's incredibly, no, stunningly boring to do that much climbing in my backyard, but I can see the mountains the whole time, and it's pretty exciting when the wind blows really hard and my tree starts swaying around.
I am so stoked! Especially after driving for eight hours in the last two days and climbing exactly two meters of ice. There's lots of ice out there, but I'm after something specific...
Total cost of the Plywood Ice wall? $76. Love it.
Thanks to Margo Talbot for the iPhone camera work!
Posted by Will Gadd at 11:16 AM 8 comments:

Tomaz Humar recently died in Nepal. He was a character. Some of my friends thought little of him, others quite a lot, and both were right. A good obituary is found here. My friend Bernadette MacDonald wrote an engaging biography of Tomaz as well, interesting man and read.
Me, I'll remember him dancing on legs still so weak from multiple breaks that he could barely stand. I had been warned about his aggressive handshake, but I didn't have the heart to yank a man out of a wheelchair so I just fell on him... Those who knew him will know what I mean.
One night, after a few beverages, he spent an hour in a locked room grilling me about dry-tooling training and hard rock climbing. It was all very secretive, maybe reflecting his origins. When I asked him about high-altitude training he told me to run down from every climb like an animal, never once slowing down until I hit the road. And some other stuff that seemed crazy but somehow made sense. He went hard.
I wish his family the very best, my profound sympathies to them. Tomaz was never an easy man, but he was definitely a man charging at life for all he was worth.
This is also good.
Posted by Will Gadd at 2:42 PM 1 comment: