Invermere from near Revelstoke via the Bugaboos

In the last 48 hours I've top-landed in the alpine twice, camped high, had a ton of help from friends in Revelstoke and Invermere, and flown the coolest mountain flight I've ever had. And sunk out into a cut block, but escaped this time!
I have some wicked photos of flying right through the Bugaboos, a flight I've dreamed of for going on 15 years. Never have I flown so deep for so many hours, so stoked! From just south of Revelstoke to Brisco to landing on the beach in Inveremere, where a bunch of friends were having dinner. The Spot log should show the line, I'll post photos when I get home as all I have is my phone. Today's weather doesn't look as good but Swansea launch awaits, want to try and fly home... Fired up!
-sent from my rotten Apple.
Posted by Will Gadd at 7:10 AM 8 comments:

I'm out, ripped to shreds by the alder and cut block debris but stoked for the last two days... Not sure what the next move is but got a ride to revy and planning tactics. Making this up as I go for sure, great adventure so far. The freedom of going anywhere in the air is great, but I've learned some lessons.
edit--I just looked on the Spot tracking page, the satellite photo is NOTHING like reality on the ground! Nothing!! The photo must be from 20 years ago, most of the roads in that photo are no longer visible at all...
Not all cut blocks are launchable. In fact most are barely landable!! Logging roads grow over to the point where they are worse than the bush, even if they show on the gps. BC bush is really fierce. There's a fine line between vol bivouac and vol bushwhack, and I got well on the vegetation side of it.... I landed high in Plant creek about as deep as you can get in the Monashees, thought I had an ok cut block (logged area) that would be good to launch out of but wound up hanging 6 feet off the ground. Solved that, good thing i had a wrench for links on lines and can climb ok, nice night with morning bear, could not escape my block for hours in the morning. Priorities went from launching to finding a place to launch to just getting out of the valley I was in, epic bush. Totally impossible to move through that logged bush at more than a few hundred meters an hour. Finally called my mom on sat phone (you know it's bad when u call mom) who found a way out on google earth. Hiked about 10k of bush nasty grown over skidded trail and another 20 of road, got ride (thanks Becky!) to Revy. Happy to be here, developing new plan and solving tech issues with Spot etc
The flight was super fun, walking from the greyhound station in vernon to launch fun, fighting out of bc bush 80k later not so fun but not boring!! Flight conditions were not great, really happy to have flown what I did.
I'm not done yet. Forecast today not so good but I'm destroyed anyhow, see what I can come up with. Will solve Spot issues this morning...
A huge thanks to Doug N. for the help in Vernon!

-sent from my rotten Apple.
Posted by Will Gadd at 7:33 AM 7 comments: 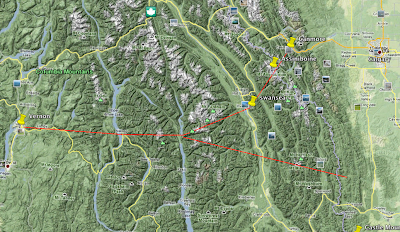