A month or so ago we did a Mountain Movement course here in Canmore, which was a lot of fun, and I learned a lot. One of the participants wrote up a really funny report on the experience, love it! "Gravel Boarding," ha ha! Can't wait to build the "Playground" up again, I have some new ideas for torture...
I'm playing with some new ideas in climbing training. I've spent 25+ years climbing, so my movement patterns are half decent I think. Unfortunately, due to a few injuries, other sports, etc., my climbing fitness is pretty weak right now. Normally I start with a very high volume base cycle, but I have limited time right now as well as some decent base fitness from other sports, time for a plan B. I've been doing relatively short but higher intensity sessions in the climbing gym, trying to pack larger volumes of movement into shorter periods. The classic version of this type of exercise is the 4x4, but my goals involve longer days on terrain up to 5.12, I don't think I need more power endurance than I have right now, just more endurance and the ability to absolutely blast pitches. What I really is another gear, another way to put out more watts faster in a shorter time period.
My experiences with both Crossfit and training "long-interval" style for the dZi Foundation 24-hour climb have led me toward trying to do bigger sets of fast intervals and then adding a "big gear" load on the end of each total interval. I really felt this gave me one hell of a base for the 24-hour climb, and that's sort of (no more 24-hour stuff though!) where my head is at. So 4x4s with heavy kettlebell swings as the fifth station to totally fry my system, or a long traverse with thrusters at the end to mess me up. One thing I've noticed with doing intervals is that the ability to handle that kind of "Now we're going to gasp for three minutes!!!" load responds much better to training than I used to think, and unlike many forms of training the response isn't sports specific. Putting out at an anaerobic level is a skill, whether it's racing up a pitch or doing thrusters. Anyhow, it's an idea, we'll see how it goes...
I'm also not happy with my definition of fitness from the last post. I think I missed a few things, namely that there is a sort of "base" fitness level where the participant is fully functional, meaning not grossly overweight, can move up stairs quickly without gasping, etc. My definition is more based around athletic expression, which is a narrower definition. I'll keep working on my definition, but it's not as good as it should be yet.
Time to go get after it!
Posted by Will Gadd at 9:38 AM 5 comments: 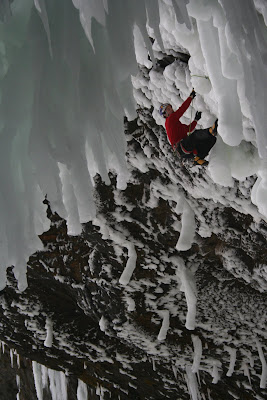 If you could only pick one muscle or area on the human body that would tell you how fit someone is what would that area be? Pecs? Quads? You might say that it would matter what the definition of fitness is, and that would be fair, so I'll deal with that first. At length.

Lots of people put up arguments for what "fit" means on the comments part of my last fitness post. What I see in all those well thought-out comments is that fitness is highly situational, and very difficult to measure without skill at the fitness activity being tested playing a large role. There is no way to test for "fitness" without the testing method or apparatus playing a large role. The most empirical and non-apparatus "fitness" test would be blood tests; that might give a hint of how "well" someone is, but blood tests will tell the tester very little that's useful for predicting how an athlete will perform. "Gee, this blood work looks fantastic, I bet whoever gave the sample can run a 400M really fast!" That's obviously funny to me. Running a 400M fast is legitimately cool. Everything after a blood test involves skill, not just power or watts put out. And if the test is based even partially on skill then how "general" can any fitness truly be?

Even the most "general" fitness that I know of and practice, Crossfit, is still highly apparatus and skill-specific even as it develops a reasonably broad level of general fitness. For example, an athlete may have the base power to do overhead squats, but until the athlete has the shoulder flexibility and movement patterns an overhead squat will be very difficult (I use this example because I truly suck at overhead squats). An overhead squat may help with athletic performance in other sports, but by itself the skill will, until learned, likely trump the "fit" component of the movement. Every activity in the Crossfit games had a major skill component (even the wheelbarrow event, I could sure tell who had run a wheelbarrow before!); what the Games are testing is the ability to do a lot of different skills at a reasonable--not elite--level, cool.

Comparing athletes in different sports is fun and interesting, but comparing their performance or fitness levels is pretty hard to do unless the football player puts on skates, or the basketball player straps on a set of slalom skis. I think everybody would see that would be kind of ridiculous, and that's why claims of being "The fittest athlete in the world" are the same. Fitness without a specific expression of fitness doesn't exist. Put another way, fitness is inextricably based on the skills required to demonstrate that fitness. Fitness without performing a skill is impossible to define as fitness; inevitably the skill shapes the performance.

Most of the improvements in the opening weeks of any training program come not from increases in strength but in increases in skill. Even after years of sports-specific training skill will still often trump pure power in athletic events. Pick any sport out there; the ability to squat 800lbs is less important than the ability to read the action, see the game, and execute the movement, whether the sport is climbing, skiing or NHL football.

However, having a functional body that is strong is obviously a hell of an asset for any sport or life, and I do think Crossfit does a great job on functional movements. That's why I do it; not to be "fit," but to be functional. Big difference there. And before anyone involved with CF gets bent, I think Crossfit athletes are incredibly fit, even though I can only measure their performance at Crossfit.

My definition of "fitness" is this: An athlete's ability to successfully perform at whatever activity or task he has trained to engage in. For a person who wants to run the Grand Canyon rim to rim in a day then doing that successfully means they were fit enough. For an ice climber on a difficult first ascent that means doing it without injury. For a military group on a patrol in the mountains that means getting the job done and being able to patrol again without excessive recovery time. For a Crossfitter it might mean eventually doing Fran in under three minutes while also deadlifting over 500 pounds. For my friends in chairs it might mean being able to bust it out down a flight of stairs and remain solidly in control. All cool expressions of true fitness, but obviously impossible to compare meaningfully. The Crossfitter would die on the ice climb, the ice climber will suffer on the Grand Canyon run in the heat, and all of 'em could die on the patrol... Fitness is just impossible to separate from the situation it's performed in. A fit individual will be able to perform and successfully function in a given situation, or he isn't fit. Being able to do a select set of exercises (Crossfit Games) reasonably well means that someone has trained for just that, and may be the fittest in the world at that combination of those motions. Cool again, but I'm still not buying that the top Crossfit Games athlete is the fittest in the world at anything but Crossfit. Of course, it's fun to argue the question as I'm doing here.

Now, having defined fitness as successful specific task performance, here's a very general question: What one muscle or one area in the body immediately displays someone's fitness level, or at least the broadest prediction of reasonable fitness? If you had to line a bunch of people up and use a screen that would only allow a small glimpse of each person's body to predict their fitness level what part of the body would you focus the screen on?

In my world that one area is the calf and muscles on it. I was sitting with my wife in a cafe the other day that had a huge volume of people walking by and through it, mostly in shorts as it was a hot day. The busloads of tourists basically didn't have calves; it was like a surgeon had cut the muscle bodies out. The cyclists who rode their bikes in did. The climbers on their way to the crag did. One old guy and his wife sported calves cut into granite blocks from decades of walking in the mountains. A "display model only" body builder in a white wife-beater had no calves, and I'm pretty sure he could only define his fitness level with a bicep curl contest, which he would win (pro bodybuilders have rad calves).

Developed, cut calves tell me that the athlete spends a lot of time moving on his feet, whether it's playing basketball or running. Almost every good real-life athlete (as opposed to a gym poseur) from the military patrol in Afghanistan to a mountaineer, will have solid calves. If I had to predict an athlete's performance in the mountains without knowing anything at all about him or her I'd look at the calves for a rough answer; mountain athletes always have strong lower legs.

And that's just it. I'm a mountain athlete; that's where I do my sports in general. If I were looking for the "Fittest Athlete Alive" I'd have a radical kayak race, a deep water soloing competition, a distance paragliding competition, a mountain bike race, a hike and huck paragliding event, etc., and I'd call whoever won that the fittest athlete ever, ha ha! And I guarantee that the winner would have some solid lower legs. No Crossfitter could touch my definition of "fitness," just as I would be mincemeat in the CF Games, or on a pro basketball court. Now I'm going to do the WOD just 'cause I like it, which when I think about is a hell of a huge plus in any "fitness" regime. If you don't like doing it then eventually you won't, and that's the biggest problem with most "fitness" bikes etc., they are deadly boring long-term.