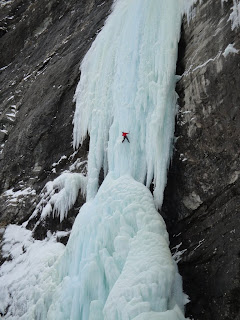 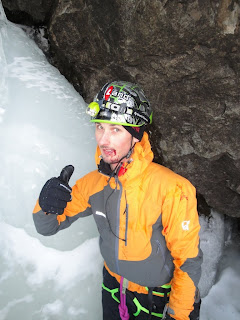 What auto locking device do you use/recommend for lead belaying with that skinny a rope and in possibly icy conditions?

I'd also think that with good ice screws, you don't need equalization, but if I may drag your thoughts out on the topic, are you against just "pseudo" equalization (like from a cordelette), or also the equalization from setups with a sliding power point (Trango makes a sling+ring piece for this; I suppose the risk is shock-loading the other piece(s) if one blows, but I figure the odds of shock-loading are low if it's equalized in the first place)? Just curious on that.

Also -- and this may be obvious -- it sounds like you leave the V-threads in place for the descent, vs. having the second attempt to untie? Do you thread rap rings on these?

Thanks again for this post and for all. Your blog is great!

Ryan, I'll use anything I think will work. If the rope is really icy and skinny then you need to go to an ATC or something pretty quick. A good "Dry" rope helps a lot. I don't want to use brand names on something that's inherently likely not safe to begin with, ha ha!

Anon: Trango's rig is a good implementation of the idea in my opinion, but for me all that stuff is more of a PITA than it's worth, especially for winter climbing.

The bottom line is that at least one piece in a belay system must be absolutely bomber. If you don't believe that at least one piece is absolutely immortally bomber then the belay isn't a real belay to me, and I don't trust it with my life and that of my partner's. I prefer two pieces that I believe are full-strength. I have retreated off routes when I can't get a belay I think is absolutely solid, it's just essential. An "equalized" belay usually isn't, and isn't solid if it's relying on the concept of equalization to be solid...

Yes, leave the V-threads in, much faster for the descent. I don't use rap rings as you can't generally feed the knot through them, I prefer old biners if the pull is at all marginal.

Thanks a bunch, Will! Yep, I've found the Trango thing to be nice but more work; also, b/c of added length (vs. clove hitch) it makes you place gear higher if you want the power point at chest height or thereabout. ("Anon" = James)

Sounds like some good hints and tips there which I'll see if I can try out as soon as I can get out again!

Hi,
Do you have a link to a page where I can read about the impact testing of half ropes vs single ropes ?
Thanks

Great stuff, Will. Perfect, new tricks for an old dog.

Thanks for the ideas, especially the great use of both holes on the ice screws.

Here is a whole lot of information on impact forces: http://gravsports.blogspot.com/2006/11/single-and-half-rope-impact-forces_30.html

Doug, I always rap with the fat line through the V-thread, or "Pull Skinny!" I have screwed it up with no ill effect, but seems wise when using ropes with radically different diameters as the fat rope will tend to create more friction and pull across the V-Thread cord. I increasingly leave old biners on the V-Thread cords for this reason and to make the pull easier.

But when do you stop for a cup of tea and a cucumber sandwich?

BTW if it's going to be a hard pull I'd pull the fat cord (less friction), but if it's windy pull the skinny cord (fat rope will fall better).

Great post. Will's right-- speed is your friend; fast transitions are often the difference between beers and nachos, and a miserable night standing in an ice cave or wherever.

For those who want the tricks for rock, here's the compilation of The Trad Climber's Bag of Tricks.

"Tons of water ice found on moon's north pole" - When I saw this I thought of you.

Thanks for all the great entries and advice.

Just coming up to Ice season here in NZ so catching up on your Blog.
Some great idea's we'll be able to adapt to our use. Having taught ourselves pretty much, it is great to see what someone more experienced does. I found the Women's chapter in Modern techniques book really helpful too. Cheers
Sally

Thanks a lot for very helpful post!
Just a couple of newbie questions, hope you don't mind:
1. Did I understand right that all three pieces of belay system are totally independent and the second climber loads only one piece while belaying? And that the other pieces are only for backup and are loaded only if the primary piece (e.g. thread) fails?
2. And somewhat intriguing part with leader working on V-thread while second climbs: with ATC Guide you need at least one hand to pull up the rope (if I understood the process right), so it means that the leader makes V-thread with one hand?
Thanks again for the post and a million thanx if you find a moment to answer.

1. All three points are linked together. Belays are very seldom "hanging" in ice climbing unless the leader has screwed up. I actually can't think of one fully hanging belay I've ever done on an ice climb, ever. So the second shouldn't be loading anything. If the leader falls then the second will load the lower piece first. Not sure what you're thinking here to be honest, but hope the above answers it.

2. With an ATC you usually pull in rope while the second is moving, and work on the thread when he or she isn't moving. Unless your partner is incredibly fast (and few are, ice climbing is not generally race-pace) then you can usually get the thread done if you're reasonably practiced at building threads.

Thanks, that's exactly what I wanted to know. I've never yet multipitched ice myself but have seen some pictures of people hanging on steep ice while belaying, hence the "hanging" :) That doesn't really change the process though - if I got it right this time, the other points are loaded only if the first fails (and this severe load is more likely if leader didn't yet screw in some good screws and falls all the way to the belay).
As for the belaying the second, I just forgot to account for the screws second climber has to remove, apart from not climbing lightning-fast... So I suppose there should be enough 'free' time.
Thanks again for comprehensive answer and sorry for my English :)

Great Post... Have a quick question... are the first two screws tied directly together or are you tied to the first, then back to your harness before going back to the second screw?

Anon--rope goes from your harness to the first screw, clove, up to the second screw snugly, clove. All kinds of permutations to this can be done using the rope, but complicated systems using the rope are a pain to switch out unless the leader becomes the belayer, like when swinging leads. For normal "block" leading the belay has to be an easy-switch system, so use slings or whatever if it's a complicated situation. HTH.

What dim are you using on the ropes? Both the lead rope and the rap line. I climb with dbl rope, but am always up for a little weight saving.

9.2 nano, 7.7mm tag line that stays in the second's pack. It's not just about weight, it's about cluster... Double ropes are a hassle.