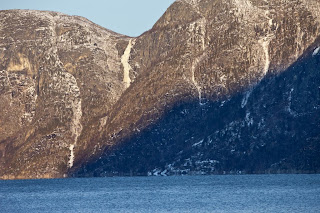 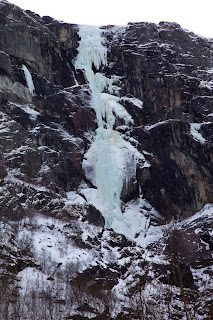 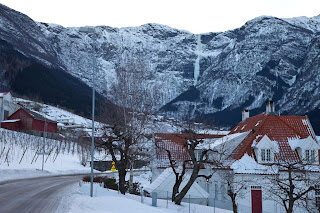 Norway 2010 is wrapping up. It's been a great trip--as always, Andreas Spak and I found insane ice, climbed it, and are destroyed. Christian Pondella came along to shoot some photos, but also ended up climbing a lot--dang photographers climbing our routes!
Link to Andreas Spak's blog, with LOTS more good photos!
Waterfalls are called "Fossens" in Norwegian, so everything has some consonant-colliding letter disaster followed by "Fossen." We climbed Fun, Sketchy, and Freaky Fossen, or at least that's what the real names sound like to us with our horrible ears for the language. We're going to use the "real" name of the waterfall from now on when reporting on it, this should cut confusion down. Full details below.
Yesterday Andreas and I climbed the classiest, the cleanest, the most stellar waterfall line I've ever done. It's the plum line in the Eidfjord area that I've seen (there are probably ten more equally good, the place is that insane). It was an all-day boxing match, a battle between desire, physics and sanity. Darkness started to fall on us while we were 7 pitches off the deck and standing below a 50M+ column of glass soda straws held together by crazy-climber glue. Below us was 450M of difficult, tenuous, downright challenging climbing. Maybe something like doing Sea of Vapors, then Nemesis then Curtain Call but, at least for me, more demanding all the way. You can't call a route an FA until you get to the top no matter how much you want to. Headlight on, shut up and swing. Then the spindrift started. Each placement involved 20 to 50cm of digging, same for the screws. Eight raps in the dark back down. I kissed the last V-thread on the way down that we had put in on the way up. done. Except for the walk down and four-hour drive. Stimulants were abused.
I'm pretty sure all the routes we did were FAs, but maybe Guy Lacelle did 'em, that's happened to me before. And does the FA of a water ice route really matter all that much? It's going to be different again next year, and if you don't know it's been climbed then what does it matter? And even if you do know it's still different every season, totally new ice... FAs are most useful for sharing where the ice goods are so others can go and have an experience on 'em.
Grades are increasibly sort of the same to me; beyond "it's steep, not steep, whatever" ice grades generally have far less to to do with how technically hard something is than what's going on in the leader's head. And, speaking personally, my head is a confused place while leading tenuous water ice... In kayaking we've pretty much given up rating rivers past class 5. All hard rivers are class 5, it's the people, picture and story that matter. For example, if a bud of about your ability and fear capacity runs a waterfall then it's about that hard. If he breaks his back then it's maybe more technical. Drops develop reputations--gnarly, friendly but looks gnarly, gnarly but looks friendly, etc. etc. People keep coming up with technical vs. danger vs. flow size vs. rescue options etc. for rating rivers, but in the end it's about the people, story and photo (I'll post some later, we're failing on that this morning, more coffee required). I think ice climbing grades past, "It's kinda vertical for a good distance and therefore WI 5" are likely useless. Almost all "hard" ice routes are some version of water ice 5 with bad gear. So all hard ice routes, like hard rivers, are "grade 5" plus the stories and photos... Yeah, I just rated something WI10, ha ha!
Photos etc to follow but here are the particulars so people searching the web will know how to get there etc. We found all of these climbs on the web or by looking out the window of our car.

Big Rig Across the Lake from Eidfjord ("Fun Fossen," not sure of name)

500M, (WI grade it whatever you need to feel good about the grade) Gives you everything you need.

2011 Note: Although it would seem pretty obvious, there is avalanche hazard in the Eidfjord area. Check this report out for why it's important to keep thinking about avi hazard anywhere in the mountains.
Posted by Will Gadd at 12:26 AM 3 comments: