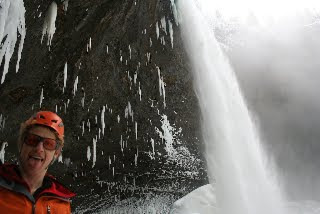 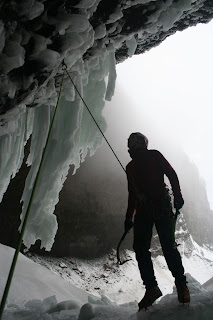 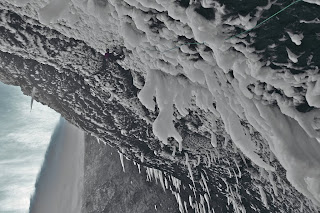 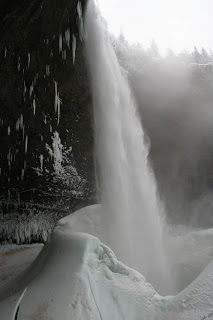 A 30-metre route with 12 bolts?! Wow, that must have been an incredible adventure....

Tim, must have missed more flights than anyone else I know.

Ha, ha youre right Mark, its probably something like 50/50 that he'll make any flight. Great effort you two, a real example of how things happen when the right people get together.

In reply to the other Anonymous: wow how amazing you must be mate, don't forget to feel superior as you bumble up your next massively easier but more traditionally protected route, and try not to have any fun cos that won't bolster your ego as much as pain

Anon #1: Steep routes require more bolts in order to keep from slamming into the deck. Would you prefer that Will used fewer, and died?

Anon #2: Yep, it's spray. Maybe you should try giving this route a go. Seems that Will thought that it was fun--and a new way of climbing ice. Have you ever done anything original like this?

Will: Be safe. Have fun. In that order!

It's super fun, you all gotta try it!!

I'd have preferred to do it on natural gear, but let's face it, I'm not the most bold climber on the planet (Dave Macleod, Ueli Steck?). However, I don't think it's over-bolted given that you'd definitely hit the ground while clipping any of the first five bolts, and that would be very painful at best due to the ice blocks and upside down daggers. Really steep routes do require more bolts low, but I did a couple of aid moves between every bolt--I put one in when I started to really worry about decking, and that's as bold as I'm going to get.

As for the "spray indeed" comment, yes, the name has multiple meanings. Have some fun with it, spray on indeed!

Mark and Ian, funny, Tim swore that was the first time he'd missed a flight.

Hmmm...Tim also told me he'd never missed a flight before...I'll have a word with my man. But hey flight aside, looks mental- that climb! Nice one guys!

I've also missed a flight with Tim, after he dropped our hire car keys off a big wall. Legend.

What a silly comment above about choosing between less bolts and death! I think the point is that if Will wasn't capable of climbing the route cleanly then it should be left to someone who can, someone with a more pioneering spirit. Not that there's anything necessarily wrong with what Will and Tim have done, it's just that it should be classed differently, as some kind of fairground ride, not a climbing route. Still, I'm sure the self-congratulatory and sycophantic comments will continue to pour in from those who live in their own little insular world!

I thought that the bolting wars were settled years ago. Seems that Will completed a cool and innovate climb in a reasonably safe manner. Bolts were a good choice. Nice style.

All climbing is pretty much a carnival ride of some sort. Hop on, enjoy the ride, and quit whining about somebody having more fun than you!

http://www.flickr.com/photos/sbbcdreamer/2241570962/in/photostream/ Definitely looks like it freezes up more. I'm interested to hear what the ice is like when its colder. If you have one it would be rad to see a picture of where the route goes looking at a picture of the falls itself.

I'm totally with you - Gadd is such a douche...

2. If he had any real balls he'd swim from shore out to those icebergs in the middle of the ocean, wearing his gear, and towing the camera crew behind him, and then start climbing. Otherwise he's just another chump.

4. He only raised enough money for the dZi foundation to build ONE school in Nepal. It's not like school is gonna help those kids anyway - just like it didn't help you.

5. Anyone with enough money and sponsors could go find some abandoned mine with ice to climb. It's not like he was the first... um... wait... what?

6. He should ditch the tools and crampons. If you can't climb it naturally, you shouldn't climb it at all, right?

Maybe Gadd could learn something from your pioneering spirit. Maybe someday he'd have to balls to actually leave his name when he questions someone's climbing style. Gadd is father - he has more important things to worry about than some weak ass armchair alpinist thumbing his nose at the most epic climb ever completed. I wouldn't expect someone like you to understand this, but climbers feel a sense of community. We've just lost Bachar and Lacelle - we're lucky we have Gadd to honour them by continuing on where they left off (because I seriously doubt you're capable).

John Box, that is INSANE, thanks for that link, awesome! You are an internet Ninja, I looked a fair amount and never saw that.

So there's the "optimum" conditions. Our route is micro compared to that, so stoked for next year, thanks for the inspiration!

Matthew, thanks, I'm just making this stuff up every day and trying to have some fun, all good. Other people have climbed in the caves in Sweden, we just went after it a bit more, crazy fun, you gotta try it!

ha, ha this nameless crew have got to be Brits, surely theres no other country that gets its knicker in a twist as much as we do over bolts. Believe me I'm one of the ring leaders but only where its appropriate. This place looks like a concave version of the death star on full attack mode - not the ideal place to be fiddling with your RPs!

Will, this is what you get for climbing with a Brit.

I just saw a pic of you doing the endless ascent on Crossfit's main page! You are the man.

"I think the point is that if Will wasn't capable of climbing the route cleanly then it should be left to someone who can, someone with a more pioneering spirit."

The dude telling you to sack up is too chickenshit to type his name into a web browser. Spray on, indeed.

Butch said...
This comment has been removed by the author.
9:22 PM

It's funny how the bitchiest people are the anonymous. Whatever; Will and Tim did the fucker

a) ground-up
b) aiding
c) off ice tools
d) on a 45 degree overhanging
route.

Aid, ice tools, and 45 degrees. Any TWO of those mixed together are insane; all three, and you're in the company of either gutsy climbers or the mentally challenged.

I've done some new-route bolting on aid on lead (tho not on ice like these guys) and believe me it's pretty scary. You are hanging off of hooks that move with your every sway, your abdomen, no matter how fit you are, is screaming at you, and the drill is something like a 20 pound rabid cat that you are holding above your head, praying that if a hook blows or the bit catches, the fucker doesn't either enter your skull via your eyesocket or rip your earlobe off before it chews your knee.

When you are new routing, esp. in winter or in the alpine, you often don't have time to fuck around for days with dicey leads on gear, yo-yoing, and whatnot. Regarding Will and Tim's bolt decision, it's perfectly logical: ice and mixed routes often freeze differently every year. This year's nut placement is gone next year. How many people are going to go in there and climb that route at M10+?

And, Anonymous, I would be willing to bet that, once you send the route, ground up, on natural gear and screws, Will will gladly let you re-name it, and chop the bolts.

amazes me how fools get caught up in asides. they miss the awesome places, the unclimbed routes, the full on approach, the mind-bending decisions, the unprecedented moves, the insane headspace of being somewhere outside the frame doing something outside the cube, the application of untried ideas with your ass on the line.....then whine about bolts.

bolts aint the problem.
daft fuckers commenting from their cosy living rooms whilst others do the work are the problem.

wiseguys who let the pro get in the way of the climbing can stay in their bitter, pedantic little worlds.
let the rest of us get on with it.

stand and be counted

The Internet trolls are you.

See you in jasper some time again.

absolutely awesome, Will. any semblance of controversy -- over the bolts on an otherwise unprotectable route? over the rating...no...really? over whether the moon is, in fact, made of cheese or not? -- is so absurd as to be outright laughable. enough to where i wonder if they're just trolling us all.
regardless, way to go, being a visionary yet again and raising the bar. nicely done.
kelly

Has this route been given a WI10 classification? If so what or where are the WI9 routes?

in the glorious days of fruity french climbing movies, fluorescent spandex tights, mullets and ponytails, i remember an issue of climbing (or was it rock and ice?) where will and kurt smith got into a fairly heated debate about chipping on one of kurt's (or was it will's?) sport routes at rifle, colorado. i remember grinning at those two going at each other in print like two curmudgeonly old men and thinking 'if there's one thing climbers like to do ALMOST as much as climbing, it's arguing!'

i thought i quit climbing a long time ago but found myself at the base of a 10 metre waterfall on a toprope with tools in hand this past weekend and i loved it so much that today i'm combing the internet for gear, eager to go out for a few more rounds before the season's out. a google search for 'ice climbing' yielded a youtube video of will's 24 hour marathon in ouray (geez!), and that led me here.

i just realized this: it's 2010, nearly 20 years after that feisty argument, but things aren't so different. those fruity french movies are all over youtube, and mullets and pink spandex have made a comeback in the past 3 years against all the odds. on top of that, here's will gadd, still climbing hard and still attracting controversy. it's like i never left!

the only thing that would make this delightful return to the climbing community complete was if kurt smith was anonymously slamming will in his blog comments over a 20-year-old grudge. well....dare to dream!

spray on folks, spray on.

Im from clearwater, near wells gray park. I've only been down in the canyon during summer and can only imagine the experience in the winter. Think those bolts could be used for a unique rock route in the summer??

Hi Riel, PM me with your email, be stoked to hook up next time we're through there, or if you're out in Canmore.

I sorta doubt you could even find those bolts in spring/summer/fall due to the large quantity of water splashing around (without the ice cone water goes everywhere). But, if you could get to 'em, and they weren't too high up on the wall then you could wear goggles or something and climb there? On second thought, there are better options for climbing in the Clearwater area, ha ha!

And Anon, yeah, I remember the Kurt debate, I'm not real proud of it as I could have handled myself better. Kurt and I got over it. But it would be funny!