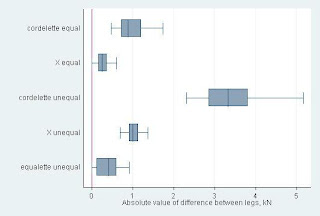 The whole concept of equalizing belay anchors has been discussed heavily lately, both over on rockclimbing.com and also on supertopo.com. I've also had some correspondance with Jim Ewing over at Sterling, who did much of the actual lab work referenced. The basic concept is that it's very difficult to effectively equalize multiple pieces in a belay, and that shock loading when one piece pulls is surprisingly minimal. We all want to do the "right" thing when building anchors, but as I've written previously, the "right" thing often isn't. This picture is lifted from supertopo.com, where a user lifted it from John Long's new book (I still need to buy a copy of that, hopefully he won't mind posting it here as it's promo for his book--I've known Long for years, he's not the sort of individual you really want pissed at you, not because of his iron addiction but because he flips words with style). I thought people might enjoy seeing the data, when I got it from Jim it wasn't in a viewer-friendly format. I find the whole discussion sort of humorous because we all used the "sliding X" years ago, then were told that the cordellette was plus bon, now it's pretty clear that the old sliding X is pretty darn good in comparison. I've played with the "equallette," overall it seems like it's more prone to mis-rigging and requires more biners than I'm likely to carry for its performance advantage over a simple sliding X. Might use it on nice sunny days when I have unlimited time to set up an anchor, but for winter climbing it's a right pain. One of the main problems with cordellettes is that the central knot often becomes set for the day after only one use, I see the equalette as being worse. At least with a sliding X frozen knots aren't a problem. I'll likely go with a sliding X with the biner clipped directly into the rope, and the rope then clipped into a third piece as a "All hell breaks loose" backup to the two primary pieces. Or something else depending on what the situation callls for, the bottom line is that no one system for building belays will be the best for all possible circumstances. I'll continue to carry a cordellette as they are very useful for slinging pillars or other features, chopping up for V-threads, rigging rap anchors, etc., but less useful than I always thought for building equalized anchors.

All of this discussion has also changed my viewpoint that tying together some "OK" pieces will make a "really good" belay. I'm now more interested in having at least one "bomber" piece in the belay, and then backing that up with with at least one and hopefully two "OK" or better pieces. I've always built my rap anchors around one "bomber" piece (Abalakov or super solid pin/nut/bush/whatever) with a backup, I'm starting to look at belays more like this given how relatively poorly even the best equalized anchor works in the lab. In combat situations systems are likely to work even less well in my experience. Lots of good gear is a good thing, this whole climbing thing is pretty unpredictable when it comes right down to it. I'm very fond of 3.5 inch stainless bolts that I've placed, grin.
Posted by Will Gadd at 9:45 AM

When I take a big fall on my green Camelot way below, that’s way more force than me and my partner usually put on the belay anchor. Really the worst case situation is when your buddy runs it out from the belay and takes a whipper onto your belay fall factor 2 style. Never has happened to me. Ouch. Isn’t that by far the hardest force on your anchor?? I'm smart enough to avoid climbing with such "buddies". 2 years ago I talked to a guy who said his friend took a big fall onto the belay anchor (ice screws) on Nemesis.......oh and lived?? Maybe he was full of shit. You would have probably heard of such mayhem. We need to look at what forces will in real life be applied to the belay anchor.

If the leader takes a big fall on lead gear the belay will get pulled up of course. Most people I see don't set their belays for upward pulls anyway. So on a huge fall at best the belayer will get pulled up at least 5 ft (he'll be at least a few ft below his pieces, then get pulled past them) smash himself into the rock and hopefully not let go of the ATC. Luckily all this upward movement of the belayer will help reduce some of the force on the sketchy nut the leader just fell on behind the funny flake. I know the friction and rope “absorb” lots of force too.

If your 2nd falls as he's following up he will put some weight on the system, but really it’s not much compared to a lead fall on a single measly piece of gear.

I've fallen hundreds of times on 1 piece of lead gear and it has never pulled. So the 3 pieces I place for a belay that usually take less weight are very unlikely to pull. It’s too late for me; hopefully some of this makes sense.

Makes sense to me. I've caught two factor two falls in all my years of climbing, and never taken one.

The reason we don't set our belays specifically for upward forces is, as you note, if it's an upward force then there's gear up there somewhere and so the impact will be lower. It's always the direct super-nasty fall onto the below that's the most worrisome.

I should have said in my last post that I’ve never had much faith in any “perfect” equalized anchor. It’s almost impossible; some gear will take more weight than others. So the 2 or 3 or more pieces of gear that are placed must all be good. OK pieces are bad. Good is good. Its very poor climbing if part of your belay anchor comes apart during a fall.

Also I know I’m stepping into tricky water here, but the whole shock loading thing doesn’t always make sense. Hopefully you could clear it up for me.

Lets use a top rope anchor with 2 pieces of gear connected to a cordelette not equalized correctly so one side is say half a foot longer than the other. For a side note even if they were perfectly equalized for a straight down pull, once the climber moves way over to one side all of the weight will go onto one piece of gear anyway. A self equalizing anchor may be better.

Back to my point with the cordelette. So if 1 piece pulls the climber falls the extra half foot until the other side of the anchor tightens, and the system holds. This is no different than a climber talking a little lead fall. The rope absorbs lots of impact. If you can’t place gear to hold a lead fall, even a short fall, well than you need to pick up another sport like golfing or surfing. If the system doesn’t hold and you die, then Darwin weeded you out of the gene pool which may not be so bad anyway. I feel I must really be missing something because I have so many friends that talk about shock loading a system like it’s the worst thing in the world. If a piece of lead gear pulls you may fall an extra 10 or much more feet to the next piece before it catches you. We usually don’t call that shock loading. Maybe shocking and unlucky/stupid.

people get pretty dogmatic about these issues, even though (as Will suggests) dogma often doesn't work out in the real world.

A big problem is the word "equalization." Half the guys are saying that if you don't equalize, you're dead, the other half are saying that it's impossible to equalize so you shouldn't even bother. We should rethink this. A better word might be "shared." It really doesn't matter if the load is shared equally, but it's obviously helpful if it's shared somewhat. A lot of the traditional setups (cordelette and X included) are capable of sharing the load, and we should take advantage when we can.

It's important to look at the tradeoffs. can you predict the direction of pull, or will it vary? Do you have dodgy pieces that could get yanked by a change of direction or by a shockload that suddenly gives them all the weight? do the rock/ice conditions call for 2, 3, 4 or more pieces to postpone your impending heart attack?

the other issue is redundancy. which just means not putting all your eggs in one basket, no matter how good the basket seems to be. here's where the simple ideas like a bomber piece with some kind of backup make sense.

an unrelated note on cordelettes: i learned a trick that makes the knot easy to untie. just stick a biner through the back loops of the fig. 8 knot (the loops opposite the power point). no matter how welded the knot gets, you can untie it by yanking on the biner. i've used this for topropes i set up for ice climbs. always comes right out.

With the cordelette knot freezing up thing; you could always use a fig-9 instead of a fig-8, much easier to untie and as strong and easy to tie correctly. Used pretty much as standard now in industrial rope access where you've got long term heavy loads on the anchor point tie-ins.
But yeah, sliding x works just fine for me so fuck it.

you have to take into account the position of the sound, the size of the place, how close is the place in where you are going to play tje music, anyway many others factors.