This is going out from the Tim Hortons in Salmon Arm, BC, sorry for the junk show layout and bad grammar but the word was out, and I wanted to post Pondella's photos of Tim Emmett and me and some words. Yeah! 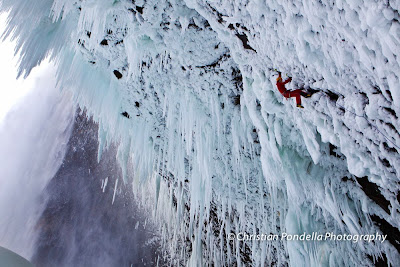 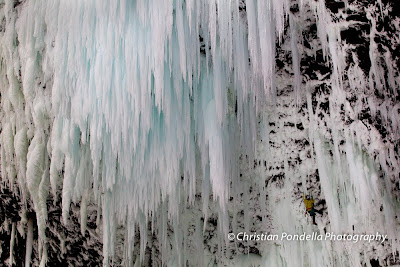 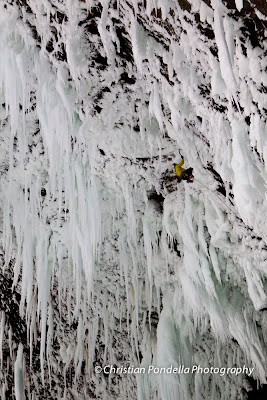 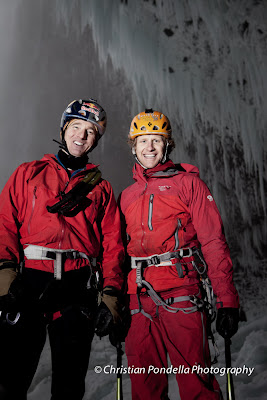 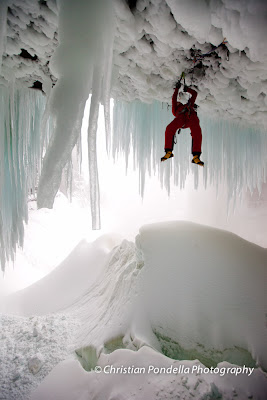 I am sure of little in life, but of this I am sure: The Helmcken Falls spray ice cave is absolutely the wildest, best, most insane ice climbing area I've ever seen. It is going to be a destination for some, but it's a journey, sort of like chasing waves off-shore or climbing in the Himalaya. It won't be for everyone, but it sure is good!
From January 16 to 25th this year, Tim Emmett and I worked hard on continuing our route from last year, Spray On. The couple who run the Helmcken Falls Lodge, Andrew and Lynn, were sending me photos of the 400-foot cave behind the waterfall starting in December; as soon as we saw a reasonable amount of white in the photos Tim and I cancelled all plans, blew off the O.R. trade show, work, and anything that was tying us down to head for the falls.
We found a vastly different scene than last year; more ice, a glacier the size of a couple of city blocks complete with crevasses we had to rope up for (and then fix lines across, a first for me), and a whole lotta spray ice! Somehow in my memory I had convinced myself that the first couple of hundred feet of climbing weren't too overhanging, but I was really wrong about that--the first 60 feet are only overhanging at about 30 to 45 degrees (the floor of the ice cave is about 30 feet higher than last year so the first pitch was shorter), but then the climbing goes horizontal in this weird 3D upside down icicle forest for a 150 plus feet. And it all went free, on ice, with only two drytool moves! It is just so good.
We broke the climbing up into five relatively short pitches due to the crazy upside down nature of the climbing, and also for safety--huge chunks of ice on the roof can rip, and you just don't want them landing on your rope or you, you'd be a human squeegee, not good. Almost all the protection is bolts; the ice will sort of hold a Spectre but it's just too soft for screws, and it's compact lava flow rock so not much if any opportunity for natural gear even if you could find a crack. I brought snow pickets to try them out, but the results were not encouraging.
In the end we made it through about 250 feet of climbing, and called it good when the temperatures warmed up dramatically and the warm temps started a several local icicle carpet bombing campaign. We ran.
We were able to find all of our bolts from last year; the spray ice tends to form in roughly the same places, and we had bolted where there was little ice. But, and I'm still laughing about this, I had bought a metal detector at Canadian Tire ("What are you mainly interested in? Finding old jewelry or something?" asked the sales guy. "Something like that," I answered, "Under ice."). The metal detector was an integral part of the rack, and will be for future ascents. The ice will be different every season, but it will share common features and lines; solving the problem of how to find bolts every year was a good step forward. And there are a lot of lines to do. A lot.
A lot of the trip was taken up with cleaning icicles and bolting on lead. This was torturous work; if someone asked me to do that sort of work for money I probably wouldn't do it. But for this amazing climbing? Yeah, we were up for it.
At the start of the mixed explosion 15 years ago Jeff Lowe and I did a route in Glenwood Canyon, Deep Throat, that was like a throat filled with icicle teeth.... At the time we dreamed of a massive cave filled with the teeth that went on for hundreds of feet. The dream is real. Tim and I made it out of the cave and onto the much easier headwall, and to the top of the best-looking ice. If it gets cold again and the ice reforms we're going back next week to push on with our route, but it's also fine as it is, and ends at a logical place. It might be possible to combine some of the pitches and that would be cool. We team-freed the route, with both of us doing pitches 1 and 2, Tim pitch 3, and I enjoying 4 and 5. Better style is possible; both of us going bottom to top would be better for starters, but it was a team effort and we're happy with that for now.
The grade? We keep getting emails asking that, and here's the only answer we're going to give: Take a look at the pictures. Read this and Tim's story. What do you think? Ice climbing is like waves to me, an aesthetic and beautiful experience more than a grade. The holds on a rock climb stay the same more or less, but an ice climb is always different. Take a look at the pictures, listen to the stories, enjoy the show, go climbing there, do both, do neither, but there's something for everyone in that cave, even if it's just looking at it from the viewpoint. Helmcken Falls is awesome.
The Reel Rock crew came along and took some video (nice work on dodging the icicles boys!), and my friend Christian Pondella shot these stills, thanks to them and Tim, yeah!!
WG, on the drive back to Canmore after a great week, and now amped on a Honey Cruller and a double double.
January 27th note: And here's a photo from Tim of the metal detector tech we used, it worked!
Posted by Will Gadd at 2:09 PM

Fucking RAD! and F' the Grade, who cares.

You got it going on man. Climbing with hot actresses...freaky cave ice...

As for a grade, why not keep with the Rockies tradition of *ahem* understatment, and call it a Campbellian 4++? :D

I love the metal detector. Just a matter of time before Black Diamond releases the Will Gadd signature model?

Wells Gray lover said...
This comment has been removed by a blog administrator.
5:25 PM

Wells Gray Lover--If you use your real name then I'll talk about this with you.

Thanks guys for sharing this ongoing story....and thanks for the wonderful photos too! I am not an ice climber....have climbed for decades in the Indian Himalaya though...have seen some crazy situations and places at high altitude...but nothing like this!!

Would painting the hangers bright red help locate them?

Marc, bright red might help a little when the ice is really thin, but it might also make them possibly visible to someone at the viewpoint with a high-powered telescope. It's pretty hard to get down into the cave from the lip even in summer, and harder in winter; maybe a few people every other year manage it? But in any case we stripped the route of every quickdraw etc. just in case we can't make it back this season. It's probably impossible to ever see anything in the cave in summer due to the mist, but better to be overly careful with other people's experiences I figure.

Looking forward to seeing more people there next time, sure is fun!

truly inspiring, have to say, in the shot of you two standing together smiling, you look like a couple of dorks, and I mean that in the best possible pulp fiction way....

An outstanding blogpost, Will, thanks for sharing. Wow. Love to see more pix from Pondella, too - top notch, A-List shooter that he is...

Stunning- I scrutinize ice pictures from all over, and this is a whole new level of beauty! And Superman work putting it up!! Geez. Don't have the WI level skills (working on it!) to climb there, but am obsessed just looking at it. Would like to head in just to see/photograph it (close, not from the lookout), but haven't been up there before. From something I read, there is a trail along the river from the parking lot? Is that how you started in? We have glacier experience and gear and enough estrogen to turn around if needed.
-and thanks for the line about leaving no trace.

Thanks for the kind words, it's a lot of fun in there. Also a lot of work to stay out from under the icicles, dig a path through 'em, etc. Look for more Pondella photos soon!

Debs, you can look at the falls easily from the viewpoint, which is one of the cooler things ever seen from a viewpoint in my opinion. If you want to get in there and behind the falls you'll need to do one short rappel and then a 30m/100 footer, followed by some easily walking and crampon travel. Sounds like you've got the skills, go check it out, cool place!!!

What detector is that? Beautiful pics, thanks for sharing your adventure!

Anon, that's a Canadian Tire Bounty Hunter 1100 model. I thought metal detectors would find stuff several feet down, unfortunately that's not the case with our level of detector, but it was enough. Kinda fun, using it to find the keys I dropped in the snow last winter and shovelled off to the side of the driveway somewhere and then buried under dirt etc... They're there somewhere!